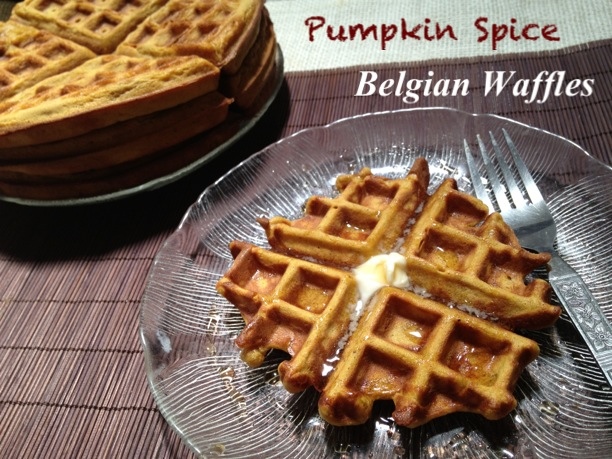 I’m so excited to be here today sharing these waffles with you all! It’s very rare indeed when I’m able to get something up on the blog so quickly after making them. But they are that GOOD, and it’s almost FALL and all things PUMPKIN…..so here I am! They have a wee bit of a story behind them. My middle daughter (10) has been asking me off and on for probably at least a year (and what would seem like 3 years to her) to make waffles. But you see….I’m a creature of habit. I love pancakes, and I have a nice skillet to make a whole bunch of them at one time.

I also remembered the last time I made waffles it seemed to take an eternity! Not just the one waffle at a time scenario, but also the only recipes I seemed to encounter involved whipping your egg whites until they were nice and fluffy and folding them in. Don’t get me wrong….they were good, but it was quite labor intensive…and remember….I love pancakes!

So last week when she asked for waffles, she was quite shocked when I told her YES!! I felt it was time to honor her wish. I did a quick search on my iPad for what I hoped would be a belgian waffle recipe with no egg white beating. To my delight and surprise…..my google search revealed an EASY recipe from my dear friend Jennie Perillo’s site! Better yet…..NO egg white beating!!

My friends…these waffles are EASY & GOOD! Try them for yourselves. Fast forward a few days later, and I was craving pumpkin something fierce. Pumpkin starts calling my name during the summer you see, and I hold out as long as humanly possible. Here it was almost September, and I couldn’t do it anymore. I remembered Jennie’s easy waffle recipe and used that as my base. She’ll be your friend forever now that you can have tasty waffles anytime without all that egg white beating nonsense.

I was a little nervous because I had this vision of pumpkin spice waffles in my head, but once you start creating a recipe….well, anything can happen. I did a quick google search of pumpkin waffles to get an idea of how much pumpkin one would use and if I needed to decrease the milk. As you can see….they turned out amazing!! They’re easy….a bite of heaven on a plate. I can’t tell you how good these are…you’ll have to try them for yourselves. Let’s just say I’ve made them twice more since the first time. Crispy on the outside and soft and chewy in the middle….pumpkin, spice, and fall all wrapped up into a warm delicious bite!

You must make these now, and let me know what you think! My hubby kept exclaiming that our kitchen smelled like Thanksgiving….and for hours afterward. And who wouldn’t want that!? 😉

Have you started dreaming of your favorite fall foods and recipes yet? What’s the first fall recipe you usually whip up in your kitchen? How far into September do you make it?