Hmmm…where to pick up? Our dilemma! Our love story. (If you missed part one, you can catch it here). One reason I had joined the Navy was to put myself first, be independent & not depend on a man for my happiness. Now…completely out of the blue…I met someone that I have fun and can be myself with, who makes me laugh, that I can tell anything to…..and now I’m feeling deep stirrings of something other than friendship. It really was like a “sneak attack.” I wasn’t looking for love, and it wasn’t “love at first sight.” It was a deep connection that grew between us daily…a bright spot in my day….a guy that won me over by his charm, humor, zest for life and his very blue eyes…and it scared me to the core! I mean, how in the world would this ever work out? There was a VERY rare chance of us getting the same orders to the same place when training was all said and done. So how hard do you let yourself fall?  But wait…I’m getting ahead of myself…we were still FRIENDS…how did we move past that?

Here we were spending every day together, and it seemed we were both reading the right signals from each other, but has anyone ever been in that very awkward place of moving from “friends” to “something more.” Anyone? It’s a tough spot to be in, right? I mean, if you admit your feelings and they aren’t reciprocated, the friendship is FOREVER changed!! Yeah…tough spot. And then THE moment came after a magical day exploring Chicago together, clad in our Navy dress uniforms and on the train back to Waukegan (where the Naval base was). It seems as though it was just yesterday, and not 21 years ago (how can that be?)! It was dark out, getting late…our seats were facing each other, and as the train sped through the night, an unusual quiet fell upon us….and the very real tension mounting between us hung in the air. I don’t think either of us made the first move…it was a leaning in and a mutual kiss that felt like the most natural thing in the world to happen. The spark ignited, the attraction was mutual and the next 3 months were spent trying to cram in a “lifetime” of moments.

We both knew this was “the something special” that everyone yearns for, so we started to plot and plan as to how we could be together. Believe me when I tell you that it seemed like an impossible feat! At age 19, we were property of the United States Navy…our lives were not our own, and we had NO control over the future of our next 4 years. We tried to follow the fantasy that we could somehow take control of our destiny, but even with rings bought, a trip to Milwaukee to obtain our marriage license and a visit to the base chaplain to discuss marriage….it’s like we both somehow knew that however much we both wanted it, the timing wasn’t in our favor. We had made a 4 year commitment to our country, and married or not…there weren’t any guarantees about being stationed together. We didn’t break up, but we did decide to do what many call “the smart thing” and held off on marriage despite what our hearts were telling us.

In June of 1990, I graduated top female of my class (Machinist Mate “A” School) which meant I had first pick of the orders offered to the females in my class. There were TWO sets of orders to be stationed on SHORE duty in Pearl Harbor, Hawaii,1 set for shore duty Connecticut, 1 set for shore duty Staten Island and 1 ship out of Norfolk. It really was a no-brainer. I mean who would give up that opportunity of a lifetime? I’m in the Navy, for my first tour of duty…and I can be on “shore” duty in Hawaii!! Life doesn’t get any better than that, does it? My best friend at the time had second pick of orders. Naturally, we picked our orders to go to Hawaii together!

Part of me died inside while making that decision because I knew that my honey missed his family, and he would be trying to get stationed as close to Florida as possible. And though I did the mature and responsible thing (not the most romantic thing), all I could go on was my experience up until that time. Even if we really felt our relationship was different and special, there was always a chance that things wouldn’t work out. I’d had my heart broken before, and I didn’t want to have regrets later in my life that I’d given up the chance to live in Hawaii. And even if “we” did work out…would I resent him one day for a missed opportunity? He didn’t want that either. We both knew what I must do.

I really didn’t plan on leaving you another cliff hanger! And I really think I can wrap this story up in part 3 (later this week). But to cushion the blow, how about I share how EASY it is to make homemade whipped cream? We topped the chocolate mousse with it last week. A few years ago when I looked this recipe up in my Joy of Cooking, I was stunned at how simple and tasty it is. Anyone can do it…all you need is heavy cream, sugar and a mixer. A stand mixer makes it effortless, but a hand mixer gives you a good workout. It’s a win/win. And if I haven’t given you reason enough to try it….let me give you a few more. It’s cheaper to make your own, with only 2 ingredients and NO chemicals it’s so much better for you and the TASTE is far superior to that stuff in the tubs in the store! You’ll see! 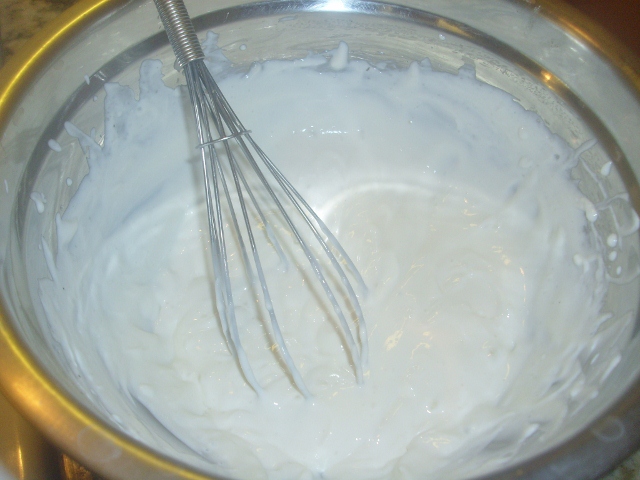 Also, voting is still open over at Babble’s 2011 Top Mom Food Blogs. Click here to VOTE for Creative Kitchen. Thanks so much!!